Facebook ads: Who is spending money to get you to vote? 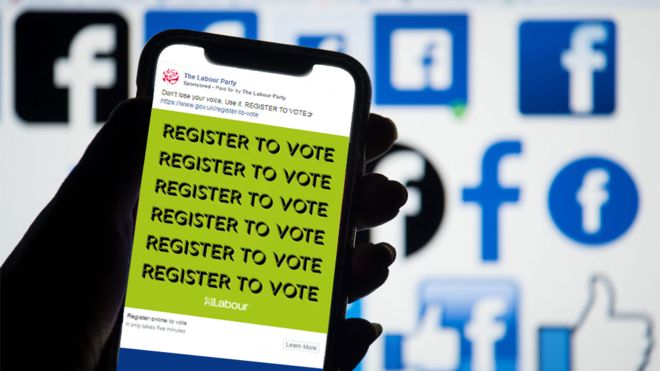 With just one week until the deadline for registering to vote, there are plenty of adverts on Facebook encouraging people to sign up.

But who's running these ads, and who are they targeting?

Younger people were much less likely to vote in the last two general elections compared to older people.

So unsurprisingly, most voter registration adverts on Facebook are targeted at this under-35 age group.

The Electoral Commission's voter registration campaign has reached around 6.5 million people by spending roughly £33,000 - more than any other organisation.

This fits the organisation's mission statement of making sure elections are accessible to everyone.

All of its current voter registration adverts are aimed at first-time voters and people who may have recently changed address, and they are targeted very strongly towards under-35s. 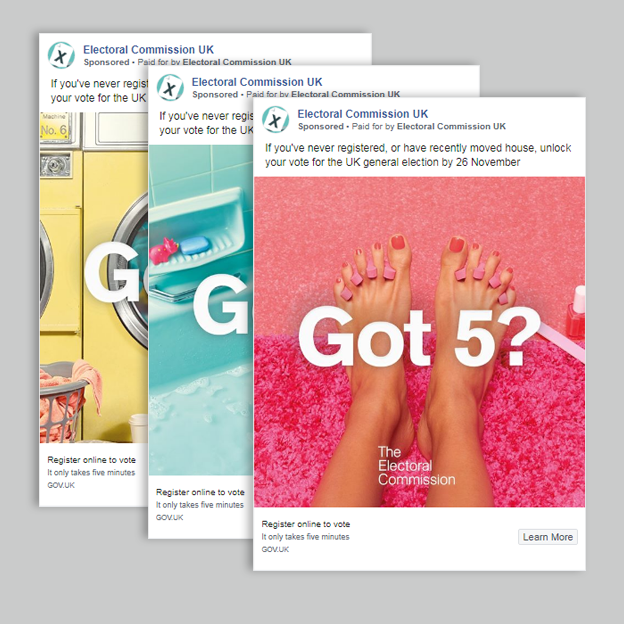 Best for Britain, a pro-Remain group, has reached roughly three million people at a cost of around £24,000.

Their voter registration ads encourage people to "avoid waking up on Friday 13th to a nightmare", but don't suggest that people vote for a specific party. 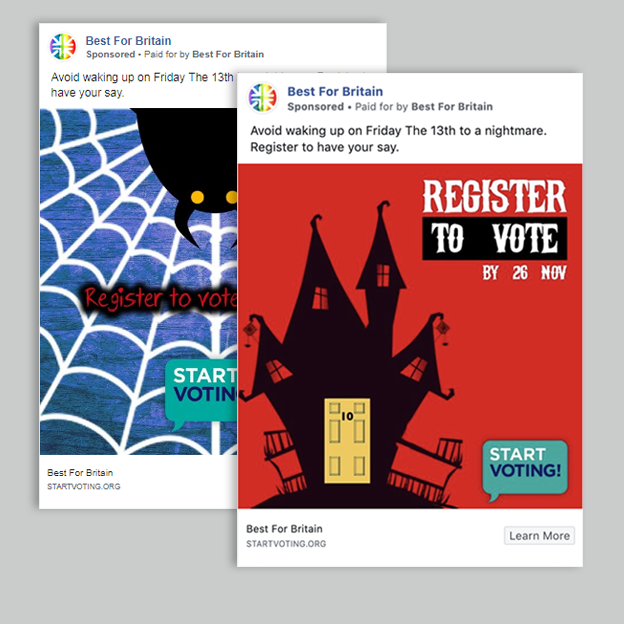 The ads from the Electoral Commission might seem better value, as they reached twice as many people for only a little extra cost.

However, several factors can influence how many people are exposed to an advert on Facebook and Instagram. This can include the advertiser's budget and targeting preferences.

So it might be that Best For Britain are trying to reach a more specific audience or a more popular one, which would also make it more expensive.

The pro-Labour group Momentum has also been on a voter registration drive and so far reached approximately one million people under 35 by spending about £6,700.

The adverts take an ironic approach, with characters telling the viewer "Don't register to vote". The suggestion that unscrupulous landlords, energy companies and employers would prefer it if young people didn't vote is, of course, part of the group's political message.

Other Momentum ads criticise the government's proposed voter identification laws, which would require people to bring photographic ID to polling stations. The group claims similar laws in the US have reduced voter turnout amongst working class, disabled, and ethnic minority people. 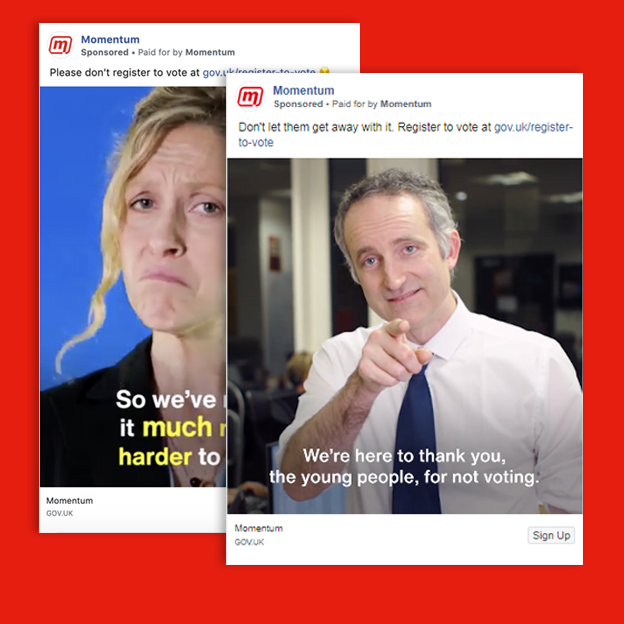 The Labour Party is showing different adverts to older and younger people.

Adverts encouraging people to register for postal votes are being shown mostly to over-35s. These include messages like "don't get caught out in the cold this election".

The party's voter registration adverts for young people have a much stronger political message with similar language to Momentum, suggesting that the Conservatives would rather young people didn't vote. 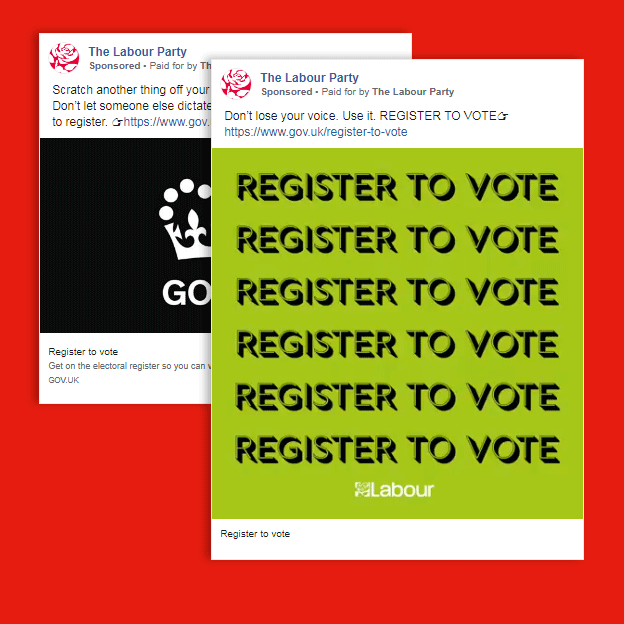 The Conservatives are advertising postal votes

The Conservative Party doesn't have any voter registration ads currently active on Facebook, but did run six between 13 and 17 November from both their main account and the Prime Minister's page.

The party's ads focused on encouraging people to sign up for a postal vote rather than recruiting new voters. The ads reached roughly 170,000 people at a cost of around £700. 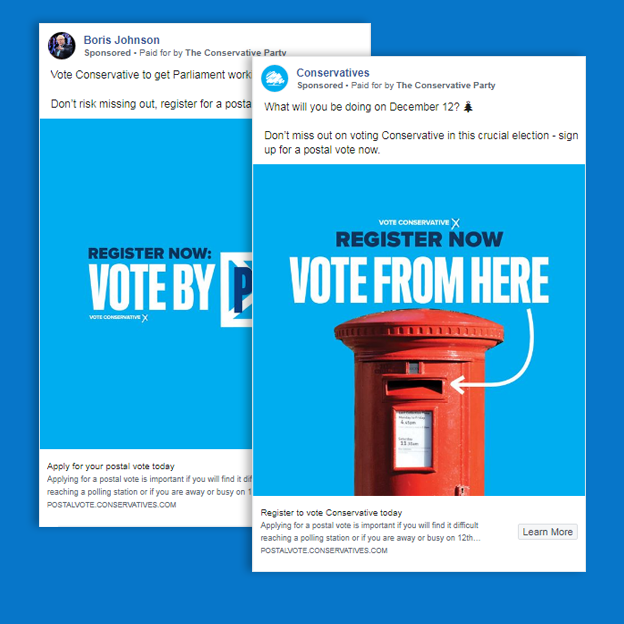 East Surrey Liberal Democrats have spent less than £100 to reach roughly 22,000 under 35s.

Though if you could reach 1,500 people in every constituency in the UK, your advert would be seen by almost a million people. So maybe these small figures aren't so bad after all. 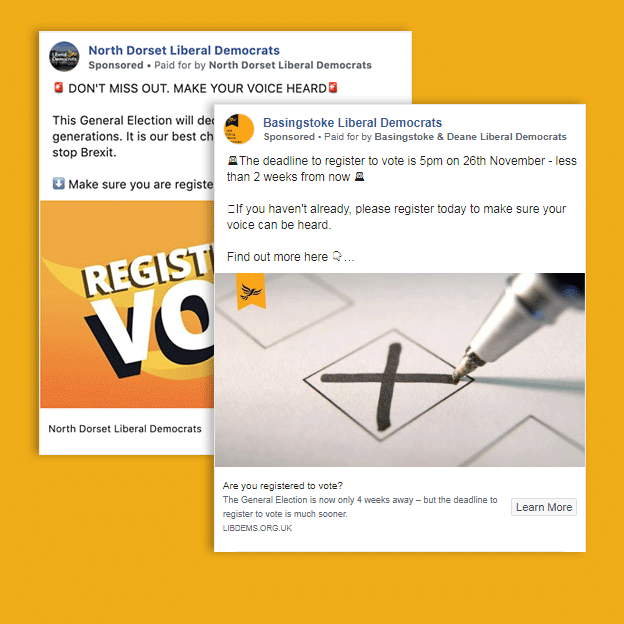 How many people have registered to vote?

Government figures show a recent increase in voter registration applications, with over two million people registering since the election was called on the 29 October. Over 1.3 million of these registrations have been by people under 35.

What we don't know - and probably never will - is whether online voter registration ads are partly behind this increase.

How we collect and analyse the data

Ads are only included in the library if they have been flagged by the advertiser as being about social issues, politics or elections.

All political parties in the UK would be expected to flag their paid content.